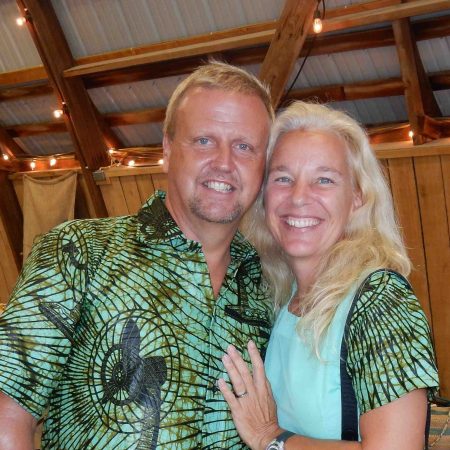 Senior Fellows, Travis and Gina Sheets are born Hoosiers, living on a small farm in Clinton County Indiana.  Travis and Gina Sheets are a part of the founding team of Hope in the Harvest Missions International and through this mission they spent five years living as volunteers in Liberia, West Africa.  Prior to living in Liberia on their farm in Indiana they built a diversified farm operation from row crop farming to raising all natural pasture poultry, free range laying hens, pasture beef, rainbow trout and a variety of fruit and produce, all for retail sale.  This experience prepared them for their work in Liberia, where they built a School of Agriculture and an Agriculture Research Center (ARC), the only one of its kind in Liberia, on a small college campus in northern Liberia.  Gina served as Vice President of the college and focused on administrative duties and classroom teaching.  Travis served as the Dean of Agriculture, built the ARC and demonstration farm and spent time in the villages of Liberia teaching the poorest of poor viable agriculture production.

Now back in the USA, the farm the Sheets built at the ARC continues to grow as a model of successful agriculture production opportunities for West Africa and other African countries. The ARC has the country’s only milk goat herd, tilapia farm, Pekin ducks, turkeys, and dual purpose poultry along with a strong year round row crop, fruit and vegetable production.  With this experience and their own farm and small business experience the Sheets serve the Sagamore specializing in tropical agriculture and business development.

Travis was asked to serve the community of Frankfort as Director of Parks and Recreation, a position he held in the early 90’s. He held the at large position of County Council for two terms, while building churches around the world for a small not for profit.  Prior to that he served as Director of Facility Services for continuing care community.

Gina has spent the past 20 plus years working in the field of economic development (local, state, and international). In January of 2013 Gina was appointed by Governor Pence to serve as the Director of the Indiana State Department of Agriculture. She was selected by USDA Secretary of Agriculture, Sonny Perdue, as the first Chief Innovation Officer for newly created Innovation Center in Rural Development.

Travis and Gina own and have owned several small businesses. They have been host parents to seven exchange students from around the world and they have hosted many international visitors at their farm. Travis and Gina are very active in their community, recognized as Clinton County’s Citizens of the Year in 2006. They are both Paul Harris Fellows and Gina is a past president of Frankfort Rotary. They have literally traveled and ran all over the world; Travis is a 2011 “Iron Man” finisher and Gina an “ultra-runner.”