Ronald Reagan would have celebrated his 100th birthday on this year’s Super Bowl Sunday. Ever fond of nostalgia, he’d delight in the old-school contest between two of the NFL’s most storied franchises. One team began playing football during his youth (Packers, 1921) and the other during his sports broadcasting days (Steelers, 1933).

But how much satisfaction would Reagan have taken from the centennial reflections on his life and career? Many accounts will undoubtedly feature his historic role in ending the Cold War. I was privileged to spend some time with Mikhail Gorbachev last year as he reflected on his time shared with Reagan on the world stage. “Many question what we accomplished,” remarked the former Soviet leader. “I can tell you this. Once there was a Cold War and now it is no more.”

Reagan may have downplayed his part in defeating Communism. While many historians cite the U.S. president’s “peace through strength” policies as crucial to the Soviet demise, Reagan often remarked that Communism was destined to fail because it betrayed human dignity and the values that sustain any society.

He might also suggest those same historians discover where those societal values are formed in our own country. This was done recently at an academic conference called “Reagan and the Midwest” hosted by Reagan’s alma mater, Eureka College. Professors gathered to explore how qualities such as optimism, modesty and self-reliance were nurtured and commonplace in small-town America. Miami (Ohio) University professor Andrew Clayton explained that the key to living in these communities was a high commitment to consensus formed by talking with others. If you wanted to change your neighbor’s behavior or opinion, you simply needed to persuade him.

Fifty years after leaving the central Illinois hamlets of Dixon, Tampico and Eureka, Reagan sat across the negotiating table from Gorbachev for the first U.S.-Soviet summit in his presidency. Believing that a personal relationship was a necessary precursor to breaking the tension between the two global superpowers, Reagan surprised his own national security team by inviting Gorbachev to visit one on one in the summit compound’s pool house.

After this exchange, Reagan famously concluded that Gorbachev was “a man with whom I could do business.” The Geneva summit ended with commitments from both leaders to visit each other’s countries within the next two years. The friendship formed during these occasions accelerated the glasnost and perestroika that ended the Cold War without a shot being fired.

It wasn’t just the place but also the times that defined Reagan’s character. Attending college on a needy student scholarship during the throes of the Depression (1928-32), he washed dishes in the women’s dormitory to help pay the bills. His dad lost a job selling shoes and he was saved by Franklin Roosevelt’s Works Progress Administration.

Thus, the great conservative president of the 1980s began political life as a FDR Democrat in the 1930s. To some, this would suggest political inconsistency. But as seen from the Main Street of Dixon, Ill., it is perfectly logical to offer a helping hand to someone who is down and to clear the way for him when he is back on his feet. FDR thought the same thing and warned that public assistance could be a narcotic if offered to able-bodied and employable citizens.

During his days as California governor, a man approached Reagan and said, “I know who you are” and then named a different Hollywood actor. When Reagan dutifully smiled and signed the other actor’s name, his astonished staff asked why he didn’t set the man straight. “It’s OK,” said Reagan, “I know who I am.”

On Sunday, we can be thankful for the man born 100 years ago who helped America regain a proper view of itself in the world: a shining city on a hill. We became such a nation thanks to the Midwestern values of humility, relationship over partisanship and doing what’s right over what’s expedient. If these things become dulled in American politics, as might be seen today, the “city” shines a little less brightly.

So let’s honor the Gipper’s centennial legacy by remembering not only his presidency but the Heartland character that changed the world. 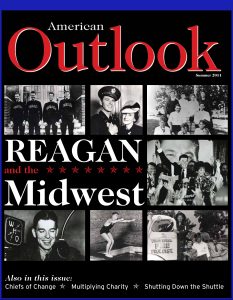