The Beauty of Front Porch Citizenry

On February 28th, 2020, Sagamore Institute hosted an art gallery event in partnership with the Harrison Center for the Arts and sponsored by Indiana Humanities. The gallery includes 8 original pieces from seven local artists centered around the theme of citizenship. These pieces highlight the unique perspectives of Heartland and Indiana citizens throughout the history of our great American experiment.

The Purpose of the Exhibit

Throughout time and place, art has been an essential way people understand who they are and where they belong. Art has been used to communicate stories of history and identity, and to convey cultural and communal values. The Beauty of Front Porch Citizenry revives and combines these two traditions: using art to build identity and studying history for moral instruction. This exhibit seeks to help build a shared sense of American identity in our deeply divided moment. This exhibit pairs rare books that explore the theme of citizenship with portraits of heroic citizens from our past – the past of America, Indiana, and Indianapolis. The talented artists who contributed to this exhibit created their works with the themes of these irreplaceable manuscripts in mind. Their stories inspire us to more perfectly live up to America’s ideals in our lives and in our own time. In celebrating, immortalizing, and learning from heroes of America’s past, The Beauty of Front Porch Citizenry helps us to begin to re-create a shared sense of what it means to be an American and citizen. We need a shared identity that is honest about our less-than-inclusive past, but one that remains doggedly optimistic about the possibility of living up to our national ideals of liberty and equality. 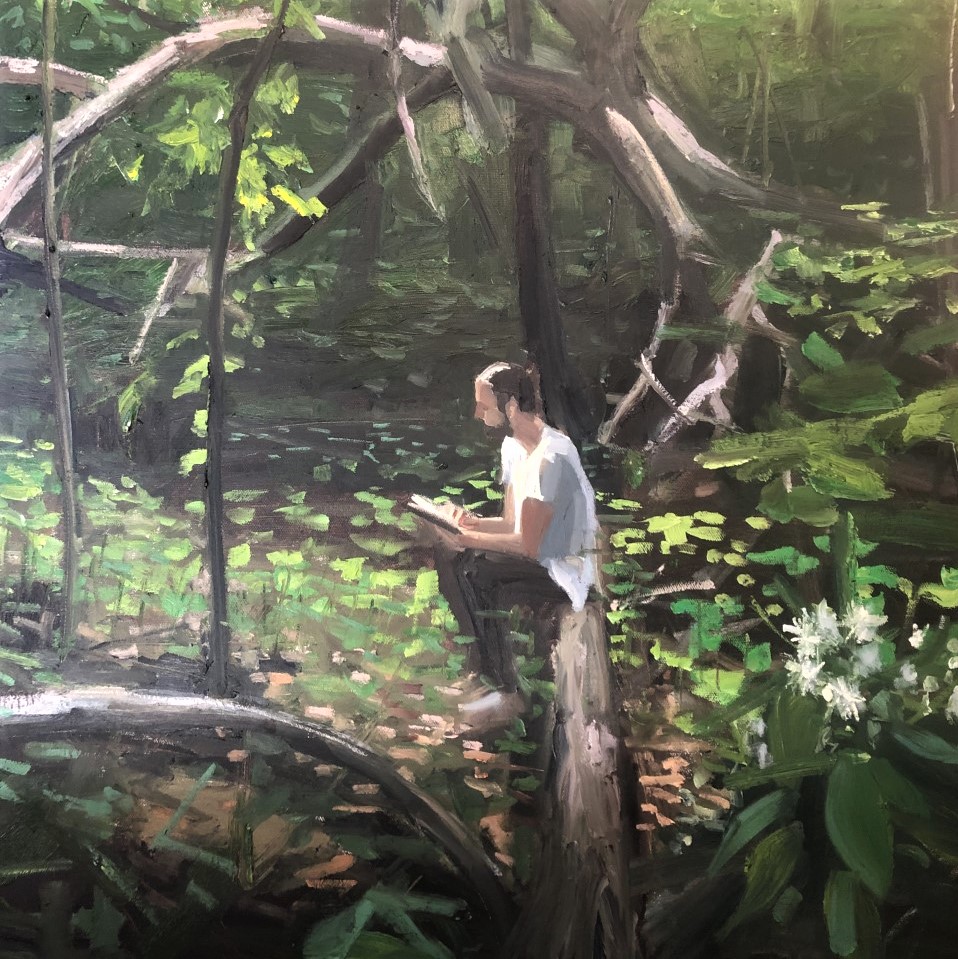 This portrait of Abraham Lincoln in his youth depicts the future president reading beneath the trees, surrounded by serene and beautiful foliage. He appears to be in a moment of utter tranquility. We have paired this painting with an original printing of Lincoln’s Gettysburg Address, which he delivered while America was in the midst of a bloody civil war and Lincoln’s world was suffering from utter chaos and devastation.

What might Lincoln have been reading in this serene moment beneath the canopy? We know Lincoln was an avid reader throughout his life, and he particularly adored reading the Bible, Shakespeare, and the great texts of America’s Founding. And in the Gettysburg Address, we see these influences.  The famous opening—“Four score and seven years ago”—alludes to Psalm 90:10, which states “The days of our years are threescore years and ten; and if by reason of strength they be fourscore years, yet is their strength labour and sorrow; for it is soon cut off, and we fly away.” Lincoln is arguing that for the nation to have survived that long was an extraordinary achievement—and its continued survival would require the heroism and sacrifice exemplified by those who at Gettysburg “gave the last full measure of devotion.”

In capturing Lincoln near both the beginning and end of his life, this pairing highlights the beautiful symmetry of time. It reminds us of the importance of an education grounded in history, art, and sound morals —something for us to consider and learn from as we think about the education of future citizens in the days and years to come. 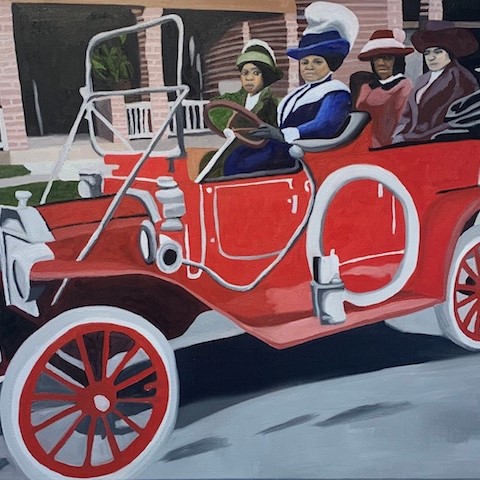 This is a depiction of Madam C.J. Walker, an extraordinary woman in Indiana’s and America’s history. Madam Walker was an African American entrepreneur who developed a line of cosmetics and hair products for African American women. She was also a civil rights activist, a social reformer, and a philanthropist. When she died in 1919, she was the wealthiest self-made woman in America.

We have paired this portrait of Madam Walker with a first edition of Mary Wollstonecraft’s Vindication of the Rights of Women, an early and important work of feminist philosophy. Wollstonecraft argued that women are human beings deserving of the same basic rights as their male counterparts and should be able to fully participate in society. Wollstonecraft asks whether all humans have natural, inalienable rights. She answers that because all rights are God-given, it is a grievous moral wrong to deny one segment of humanity (such as women) recognition of their rights. Madam Walker was similarly passionate about empowering women to fully contribute to society and realize their potential as citizens; her personal mission was to do so through teaching women business skills.

Both Wollstonecraft and Walker made important contributions to promoting equality between men and women—socially and politically—and for that we owe them a debt of gratitude. 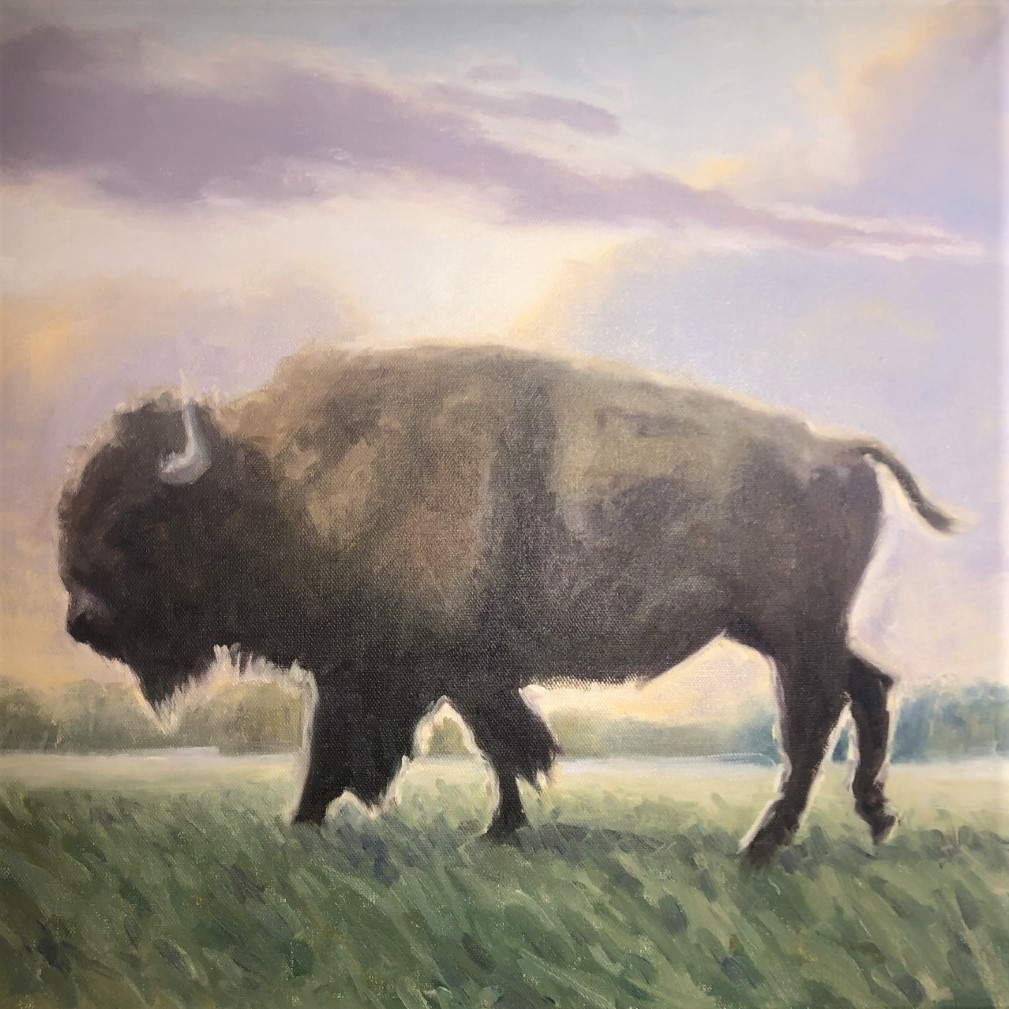 The bison, immortalized on Indiana’s state seal, is a noble beast. Scholars interpret the bison’s presence on the seal as representing the “wilderness fleeing westward away from the advancing civilization.” Bison truly are magnificent creatures, but as noble as animals are, as awe-inspiring as nature is, there is something about humanity that makes us different. But what?

Pico della Mirandola, a humanist philosopher of the Italian Renaissance, offers us an answer. He argued that it is humanity’s free will that makes us different from the rest of nature. He emphasized human volition as our defining faculty in his famous Oration on the Dignity of Man—the text we have chosen to pair with “Lone Bison.”

Pico argued that our free will gives us the power to choose to degenerate into lower forms of life, to act on instinct as animals do, but that our free will also allows us to rise above our instincts and act in accordance with the seed of transcendence within us.  This question of how we will each use our free will—to debase the world around us, or to ennoble it?—is one that we must answer in our own lives each day. Pico’s extraordinarily high view of humanity—as the crowning feature of creation, capable of great good, but also immense evil—typical of the Renaissance philosophers of his day, helps us see the profound potential in ourselves and those around us. 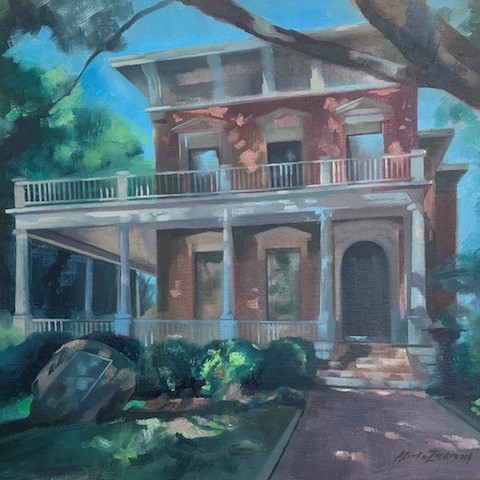 Benjamin Harrison, who lived in Indiana, served as the 23rd President of the United States from 1881 through 1887. Notably, Harrison conducted one of the first “Front Porch” presidential campaigns. Hundreds of thousands of Americans came from across the country to listen to him speak from his front porch on Delaware Street in Indianapolis. In choosing to campaign from his porch, Harrison demonstrated that he was committed to remaining a local, accessible citizen, and throughout his service as President he continued to think of himself as a citizen first and as President second.

In his Reflections on the Revolution in France, Edmund Burke observes the importance of being rooted in one’s local community: “To be attached to the subdivision, to love the little platoon we belong to in society, is the first principle (the germ as it were) of public affections. It is the first link in the series by which we proceed toward a love to our country and to mankind.” Burke thus reminds us that citizenship starts with our immediate community, with the people and places we live in and care for.

Burke’s essay is an important reminder that while we are citizens of the United States of America as a whole, our lived experience of citizenship is with our co-citizens in our community each day. We live out our duty as American citizens by caring for our neighbors—for our little platoons—from our front porches. 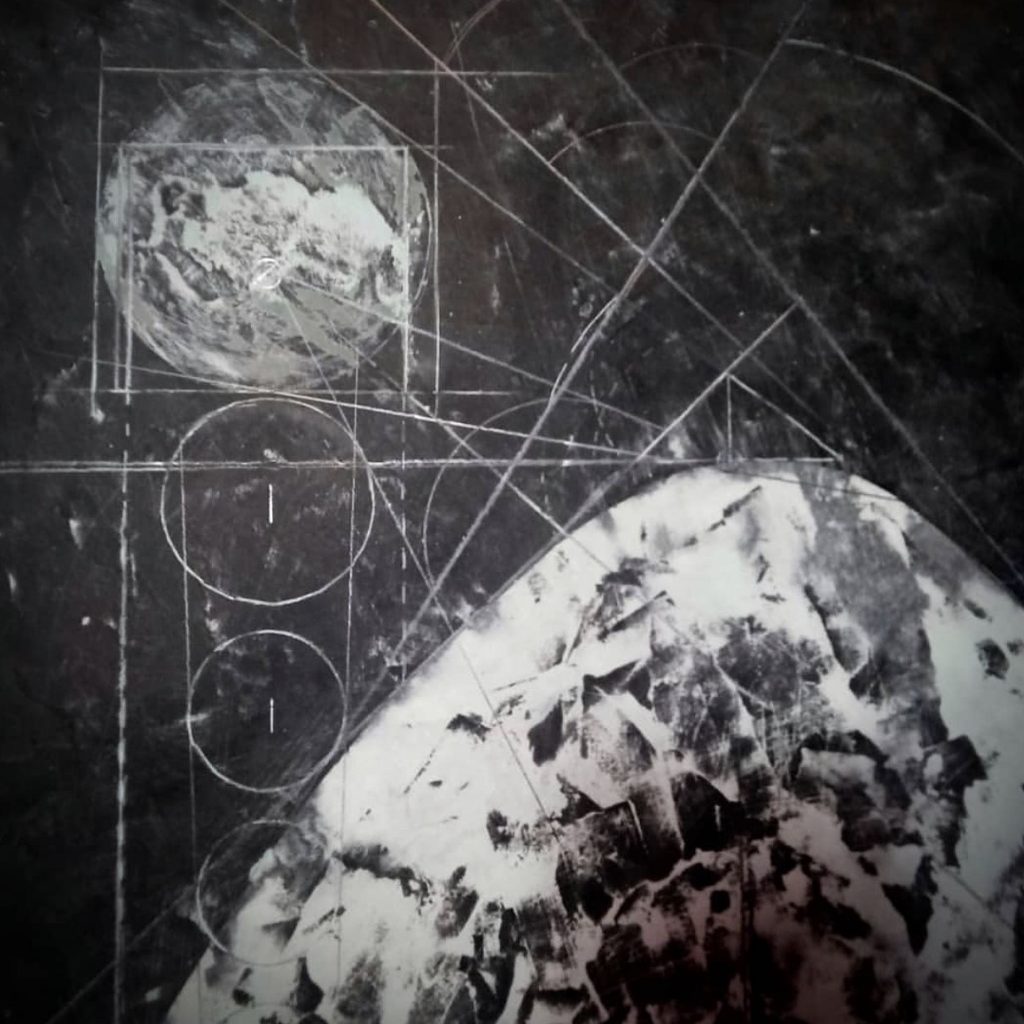 The Vitruvian man—popularized by Leonardo da Vinci and Dan Brown in equal measure— explores the dimensionality and proportionality of the physical world generally, and the human body in particular. This interpretation of da Vinci’s famous sketch is paired with arguably the most famous work of political philosophy, Plato’s Republic.

In this classic work, Plato asks a single question: What is justice? The work recounts the efforts of Plato, Socrates, and their friends as they try answer this question by suggesting and evaluating different visions of justice. In Book IV, Plato introduces what is known as his “tripartite theory of soul.” A just and healthy soul, says Plato, is all about proper proportions between three parts: the logical, spirited, and appetitive parts. A person is just when the logical part of the soul rules the appetitive and unruly part through the strong, powerful, and spirited part. Plato is saying, in other words, that justice occurs in an individual soul when reason rules passion through courage.

The same is true, Plato says, for a just society. A just society occurs when wisdom or logic rules the appetitive masses through a class of courageous warriors. Plato’s ideal regime is a monarchy ruled by the philosopher-king. Such a ruler cares more about wisdom than for power, which is precisely why the ruler will govern well. To what extent do we—or should we—value wisdom in our leaders today? What might that have to do with the state of justice in our current moment? 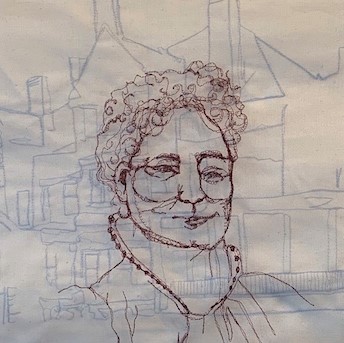 “Particularly the Women of Indianapolis”

This is an embroidered portrait of May Wright Sewall. Sewall was an early suffragist, an advocate of classical education for women, and a proponent of peace. Sewall’s commitment to providing girls a classical education was intertwined with her vision of women’s full civic participation—it was imperative, she thought, that women’s souls be crafted, their character formed, and their morals instilled in them before they could vote and fully fulfill their duty to their country.

Plutarch, a Greco-Roman moralist who wrote in the first century A.D., was for centuries the cornerstone of character formation in a classical education—which is the reason for this pairing. Plutarch is best known for his works Moralia and Parallel Lives. In Moralia, he speaks of the importance of character development in youth, that a young person be instructed on what to value and how to conduct oneself with integrity in the world. And like Sewall, Plutarch—a man far ahead of his time—was a proponent of women’s education. In his Parallel Lives, Plutarch looks at the biography of great men in Ancient Greece and compares them to great leaders in Ancient Rome. He studies these great figures to learn from them—their mistakes, their strengths—so that leaders in their own time might not repeat them.

In his On the Virtues of Women, which we’ve paired with this portrait, he uses a similar technique: studying the lives of great women to admire the good and condemn the bad. The method Plutarch applies in these works—using biography and history as a tool of moral instruction—is an age-old, but nevertheless invigorating, technique. And it is one we might benefit from reviving today. 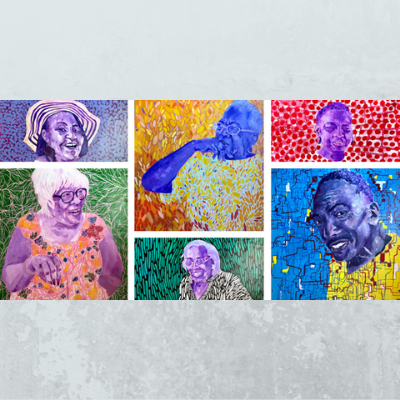 This collection of portraits by Abi Ogle are meant to recognize and honor some of the incredible long-time residents of the Monon 16 neighborhood.

These individuals have resided in the neighborhood for most of their lives– they’ve witnessed it grow and change. They shared their stories with me, and in return I hope to enter into a conversation with them that is dignifying, tied to art history, and honoring them for their time spent loving the community so well. Every portrait has an intentional art historical reference in an effort to pay homage to the work of an African American artist. Each greatriarch is painted purple, a color that is associated historically with royalty.